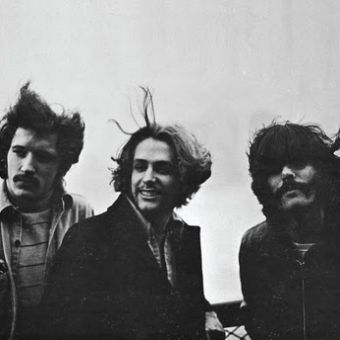 CROMAGNON is a concept of what would happen thirty years later, The project should not be smooth otherwise humanity would be lost, there is room for computers but the soul is part of the cover there are two skeletons: one holds a power cord, and the other one wall tire, it was thought that we were entering a time where there was too much electricity that was used to create wires but also on patterns away from it that’s why the other guy pulls the cord taking … we were trying to find a playground there: we do not want to use too many instruments but also we want to have a balance a little more acoustic We tried to experiment with voicing and son the face that on the see on the cover is mine (Sal) that the illustrator used The word “Caledonia” is the Dawn on the must run for our life, there are a lot of people in costume who want to transform creative people like us by imposing uniforms and a computer to do everything, they want that there is a guy sitting in a room with a keyboard connected to a computer and all that makes the album in full.