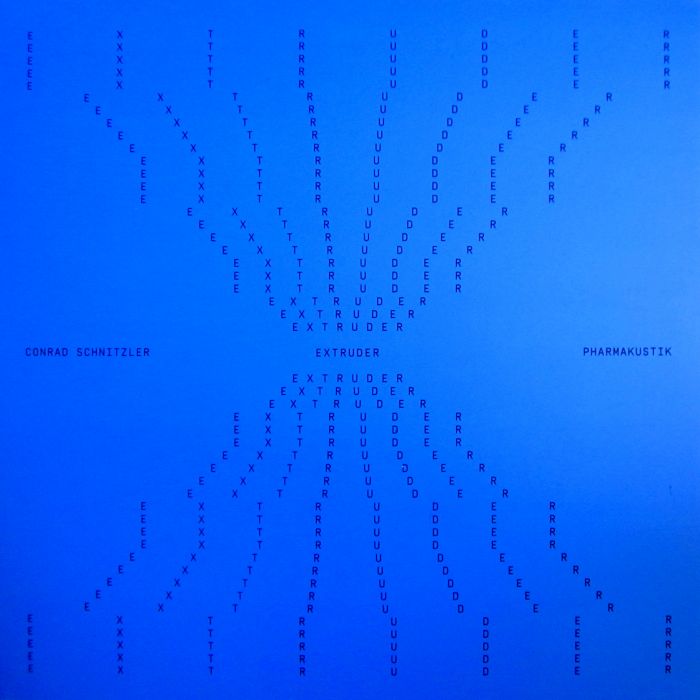 ‘Extruder’ is the second unreleased album from the 1987-collaboration between Conrad Schnitzler and Siegmar Fricke who composed and made several tapes of session-material during their musical meetings in Berlin. All recordings produced, arranged and mastered by Siegmar Fricke at Pharmakustik-studio. The album contains high doses of hydraulically driven energy generated by the complex analogue equipment. Microformed soundpools of cold extrusion collide with voltage-controlled pulsations, tape-echoed modulations and eruptive sound-deformations. Electrostatic charge (caused by compressed configurations of mechanical rhythms in ‘Kontaktmechanik’) has been combined with sonic lubrications of processed accelerators in ‘Umspulung’. ‘Abrasion métallique’ contains all the acoustic trademarks by Conrad Schnitzler: excessive experiments with dissonant portamentos of the EMS-Synthi A and Korg MS20, overlayed by metallic pressure drag of the modified rhythm-machine.
Acoustically and graphically, ‘Extruder’ continues in the excellent ‘Schwarz-Rot-Blau’-series by Conrad like the pre-released ‘Kontraktion’. The audiochemists Conrad Schnitzler and Pharmakustik developed a timeless and uncompromising masterpiece of audiomechanical engineering.